When I turned 33 on May 11 last year, I used the statistics on the birthday wishes I received through various platforms – from phone calls to Facebook –  to look at the advantages of digital marketing in my blog post “Can Birthday Wishes teach you the importance of Digital and Social Media?”

This year, I gathered even more data – from a total of 395 birthday wishes compared to last year’s 134.  I received the first birthday wish on May 10 at 4:21 pm via Facebook, from one of my former classmates in the U.S. Other birthday wishes started trickling through from 00.04 am on Twitter. The flow of wishes especially across social media platforms continued until days after my birthday. 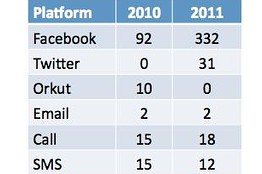 The above comparison mirrors the recent surge of social media in India more broadly. I drew out what I think have been the key trends in the industry in India, based on the birthday wishes I received.

1.    Facebook has the lead: From 92 wishes in 2010 to 332 wishes – and counting – in 2011, it is clear that Facebook has grown significantly.  In less than a year, registered Facebook users in India have doubled to a staggering 24 million.

2.    Twitter has finally arrived: Although I had a Twitter account in May 2010, I don’t remember receiving any wishes on it at the time. Instead, this year I received 31, an indication Twitter is making headway in India, too. It is becoming especially popular as a medium through which to share news.

3.    Orkut is dead: While many of us still have our accounts on Google’s Orkut, it is basically dead for all practical purposes. The fact that I didn’t receive any wishes on Orkut this year is an indication this social network has lost its remaining sheen.

The statistics on emails, calls and sms did not show a significant shift.

Honestly speaking, I came up with the idea of writing this article when I faced the daunting task of having to reply to all my birthday wishes, especially on Facebook. Responding to each wish personally looked too daunting a task, so I thought that to begin with, I would share this article instead.

It will be interesting to draw this comparison again in a year’s time, to see what it says of the evolution of social media in India.

If you noticed similar trends, please share your thoughts and experiences in the Comments section.

Cross posted from my article on WSJ