Case Study On How Burberry Became A Digital Luxury Brand

About – The Burberry Story 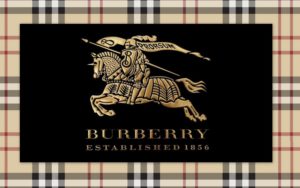 Established in 1856 and headquartered in London, England, Burberry Group Inc is a British luxury lifestyle fashion house founded by Thomas Burberry. The company designs, manufactures and sells products under the Burberry brand. The company specializes in ready-made apparel, accessories, fragrances, cosmetics and sunglasses. And, it’s merchandise is known for its signature check patterns. The brand has dressed notable celebrities from diverse fields.

The brand is synonymous with its tan Gabardine raincoat pioneered 145 years ago. Founder Thomas Burberry was not particularly pleased with the then popular rubberized mackintosh raincoat. Gaining inspiration from the country folk’s loose smocks; Thomas designed a breathable weather proof fabric, which was then trademarked as “Gabardine”, a Shakespearean term meaning shelter from inclement weather.

The rain coat was first exported to Japan during World War 1 and brought glory to brand. The coat later came to be known as “Trench Coat” due to the pervasiveness and endurance it offered during trench warfare.

The ‘Burberry Check’ was first introduced as a lining to the trench court. The Paris store owner using his dexterity turned up the hem of one of the coats to highlight the checked lining and repeated the ‘check’ for the umbrellas. The idea was a runaway success and it made & sold hundreds of umbrellas. The experiment led to the introduction of the checked cashmere scarf, a perennial bestseller.

Burberry has branded stores and franchises around the world and the brands first store opened its doors to the public in 1891 in the Haymarket region of London, while the first overseas store opened in 1910 in the city of Paris. Presently, the brand has more than 500 stores in more than 50 countries.

Burberry Group Inc is listed in the London Stock Exchange and CEO and Chief Creative Officer Christopher Bailey has been at the helm of affairs of the since 2014.

About a decade ago, Burberry was struggling and the luxury brands performance was not at par with its peers. In 2006 the then CEO Adriana Ahrendts decided to reinvent the the brand and attract younger customers.

Ahrendts prime objective was to make Burberry the first company to go fully digital and to build a social enterprise. She quoted to the Harvard Business Review “The number one strategy that came (from our first meeting) was all centered around the brand. We want to purify the brand message and how we were going to do that; by focusing on outer wear, by focusing on digital, by targeting a younger consumer”.

Strategy – How they did it

The brand has employed a strong social strategy in order to reach out to its target audience in the digital space. The bulk of their campaign has centered around social media platforms like Twitter, Facebook and Instagram. The fashion house has maintained a steady theme across different platforms but has optimized the content to suit each platform. For example it has used Facebook for live streaming and exhibiting products, Instagram for visuals and Twitter to incite user engagement and interaction.

Apart from the social media platforms Burberry has also leveraged Burberry.com in a big way to engage with customers.

Burberry went through historic transformation between 2006 and 2014 under CEO, Adriana Ahrendts. It transformed from a tepid luxury brand selling trench coats to one of the leading voices in the fashion industry. It is easily one of the most coveted and aspirational luxury brands in the world. The company’s revenue skyrocketed from 743 million pounds in 2006 to 2523 million pounds in 2015.

In 2011 the fashion house was named the 4th fastest growing brand worldwide by Interbrand (after Apple, Google, and Amazon) and WPP/BrandZ (after Facebook, Baidu, and Wells Fargo). In 2012 it was the fastest growing luxury brand on Interbrand’s index.

Learnings –  What we take home