Citibank, one of the largest banks of the United States, is a consumer banking division of Citigroup. Citibank  founded on June 16, 1812 in New York, is now a well established Global bank with presence in over 160 countries and jurisdictions.

In India, Citibank started its operations  in Kolkata, 1902. Citibank, now operates from its 42  branches in 30 cities of India. Citibank India offers a wide range of products including consumer banking and credit, personal financial products & services, transactions, wealth management and securities brokerage services to its Indian consumers. Citibank  is now, one of the most preferred banker for 45000 small and medium sized companies in India.

Mediazo, a well known digital marketing and social media agency, launched a campaign for its clients. The event, named as Unscramble48, took place on 23rd and 24 March, 2013, in Chennai and Bangalore respectively.

Many popular bloggers and social media users in Chennai and Bangalore were invited to participate in the event. The participants were asked to unscramble 12 scrambled pictures in 48 seconds.  This event was initiated to promote Citibank’s “Personal loans in 48 hours” concept and to create video content of the event. The 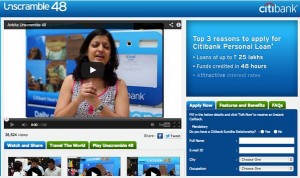 video shot during the event was later uploaded on YouTube  to create publicity and make it viral amongst the Web users.

The idea of this campaign was to make the invited bloggers play a game on the ground and then promote video of their ground activities  on social media pages.

A mailer was sent to several  popular bloggers and socially influential people in Chennai and Bangalore to come and participate in the Unscramble48 event. In this event, every participant was offered different sets of tasks like unscrambling boxes with blindfold or  hands cuffed backside while a joker moved on their side to irritate them, when they were arranging pictures or doing  the tasks assigned to them. Videos of these events were taken and then uploaded on a micro-site and YouTube. The same game activities were then replicated online, so as to reach out to the maximum number of people to achieve better engagements.

The catch contest was especially launched for the iPhone users. Here, the participants had to promote their event videos till 11.59 p.m on April 21, 2013, and the number of views gathered by each video were evaluated. The video which received the maximum number of views was ranked 1st and the creator of that video was eligible to win an iPhone5. The video that scored the second highest number of views and the creator of that video was rewarded with Sony PS3 phone. Apart from these two prizes, many other exciting prizes including Canon Digital camera, DVD player, Apple iPod Shuffle were offered to the participants, based on the views their videos received during that period.

Engaging more people on social media is the key to success and the following points, if kept in view, can  make a campaign more attractive and engaging –

This case study shows that a well planned and carefully organized social media marketing campaign activity can never go wrong and such campaigns are worth the investment.