Coca-Cola is a carbonated soft drink produced by The Coca-ColaCompany of Atlanta, Georgia, and is often referred to simply as Coke (a registered trademark of The Coca-Cola Company in the United States since March 27, 1944), the world’s largest beverage company, refreshing consumers with more than 500 sparkling and still beverage brands. Globally, No. 1 provider of sparkling beverages, ready-to-drink coffees, juices and juice drinks. The Company has the strongest portfolio of brands in the nonalcoholic beverage industry – now featuring 20 brands that generate more than $1 billion USD in annual retail sales.

The Coca-Cola system India has invested over USD 2 Billion since its re-entry into India and will be investing another USD 5 Billion till the year 2020. The company directly employs over 25,000 people including those on contract and also creates indirect employment for more than 150,000 people in related industries through its vast procurement, supply and distribution system. The company strives to ensure that the work environment is safe and inclusive and it offers various opportunities for people in India and across the world.

Coca-Cola has achieved notable successes in digital marketing, not least its massive following on social media platforms, Coca-Cola is known for their innovative campaigns right from the traditional methods to engaging and bringing humanity together through innovative digital technologies.

One of Coca-Cola’s core brand positioning can be described with how happiness can unite people, and where is it best to demonstrate the sheer power of happiness than at the border of two countries divided by decades of conflict and political tension. With this simple insight that a moment of happiness can bring the two worlds closer together, Coca-Cola used technology to help dislodge the barriers limiting communication between India and Pakistan.

Coca-Cola’s rolled out an online video campaign which featured a ‘Small World Machine’, linking Indians and Pakistanis through a live communications portal. This attracted a viewing of about 1.5 million YouTube views.

The company used a customized vending machine labeled as “Small World Machines” which provided a live communication portal linking individuals in two nations divided by more than just borders, with the hope of provoking a brief moment of happiness and also promote cultural integration and understanding around the world. Coke deployed first-of-its-kind 3D touchscreen technology to project a live streaming video feed onto the vending machine screen while simultaneously filming through the unit to capture a live emotional exchange. People from both countries and various walks of life were encouraged to complete a friendly task together – wave. An uplifting campaign shows that what unites us is stronger than what sets us apart. One of a kind high-tech vending machines is installed in two popular mainstream shopping malls in New Delhi, India and Lahore, Pakistan, two major cities separated by few miles, but seemingly worlds apart due to decades of conflict and political tension, invited consumers to shove their differences aside and share a simple moment over a Coke. 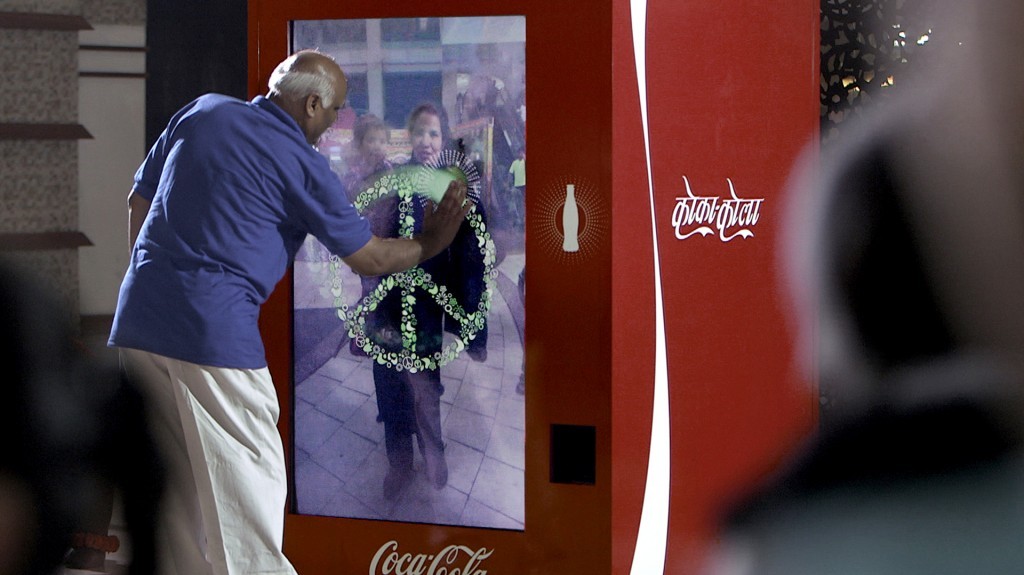 Jackie Jantos Tulloch, who personnel who led the project, compares the live simulcast experience to looking into a webcam, a face-to-face interaction with the other person. Your actions are literally mirrored, she explains. “By adding a touch screen, it allowed playing interactive animations so people could trace things like a heart or smiley face together.

This campaign from Coca-Cola aimed to break down these barriers caused by decades of conflict between the two nations and also create awareness with the new technology to share common interests in a fun way. The major key to engaging with each other through the machines was very simple: people in India and Pakistan could complete simple tasks, like touching hands, drawing peace symbol, tracing love, and happiness symbols together. At the end shoot, both audiences were in great delight, jammed up the music, danced and waved goodbyes to their newly-found friends across the border. The project team crews behind the camera joined in, too, including the Coca-Cola teams from Pakistan and India. But deep down as this campaign shows, humanity is about togetherness and happiness. This campaign culminated in a three-day event in March 2013.With over 10,000 attendees, putting aside their differences and participated in this fun fair, created more than 700 connections across the borders.

Learning From the Small World Machines

Coca-Cola conveyed a powerful message, telling a huge, more profound story about the connectedness of the world.Coca-Cola  achieves its aim of breaking down barriers and create a simple moment of connection between two nations — India and Pakistan. The campaign provided a live streaming communications portal between people of India and Pakistan, showing that what unites us is far stronger than what sets us apart, which is in line with Coca-Cola’s core brand positioning about how happiness can unite people.