India is a very important market for various automobile manufacturers whether Indian or foreign. According to a study by Booz & Company, the Indian Automobile industry will overtake the European market and is slated to become the world’s fourth largest by 2015 and will be selling almost 6 million units annually by 2020. This speaks of the interest shown by International brands in the Indian market as they are struggling in mature markets to sell their automobiles. Here, I am going to take up the case of Volkswagen India regarding their social media practice, what they are doing right or wrong.

Right now, Volkswagen India mainly has a presence across four social media platforms: Facebook, Twitter, Youtube & LinkedIn. Apart from that they have dedicated sites for their ‘Innovations for Everyone’ and ‘Think Blue campaign’ campaigns. The important aspect of Volkswagen India’s strategy is a long term approach to build loyal community and the use of all the marketing channels: TV, Radio, Print, Outdoor & Online to leverage their promotional campaigns. There are two other brands of Volkswagen in India: Audi & Skoda, but i’ll stick to the analysis of their social media practice.

Volkswagen has grown its facebook fan page organically to a community nearing the count of 25,000. As far as wall communication is concerned, they are engaging with their fans in a responsible manner by replying to their queries, appreciating the feedback, running the contests etc.

Surprisingly they are missing the welcome tab as in the case of Volkswagen International! They have a twitter stream as a landing tab which looks very cluttered although they may be trying to portray a human image with this to show how do they interact with their followers on twitter. But they should get a well designed welcome tab with a introductory video & some crucial information for a homely feel to a new fan.

Another weakness i found was on their feedback tab where most of the feedback by customers is negative & astonishingly there is no participation by the brand to handle this negative criticism! Also some people are spamming their feedback tab with the repetition of the same problem and there is no moderation of such feedback. Either don’t keep such a tab or if you have to keep then solve the problems of your customers. Volkswagen’s twitter presence is not that great as compared to its facebook page but still they are doing commendable job over there by being highly interactive with their followers and retweeting the positive tweets. They also try to solve the problems faced by their followers related to the vehicles owned by them, which is a good practice.

Another good practice i noticed is that they have identified the owners of Volkswagen vehicles on twitter & have added them to the respective lists of different vehicles. They use these lists to keep a track of their customers & occasionally inform them about any new initiatives or offers.

But what i found missing on their twitter profile is that they don’t favorite any positive tweets. In fact they haven’t favorited even a single tweet! They should immediately start doing this because it serves as a real time repository of real testimonials made by people on twitter in public. The stream of such favorited tweets can then be integrated on their site. As far as Youtube efforts of Volkswagen India are concerned, i would rate it 50-50 because as far as the distribution of videos among influential bloggers and other news media channels is concerned they have done it well and these videos have admirable number of views but they lack as far as leveraging their dedicated Youtube channel is concerned.

They should take a cue from Youtube channel of Volkswagen International who have total views of more than 57 million till date!. They should cross promote the videos of their dedicated channel on other online platforms and should provide some incentives for people to subscribe to their channel.

I was highly impressed upon seeing the way Volkswagen India has utilised LinkedIn company page. Since company pages is a new feature from the stable of LinkedIn, very few companies have actually have taken advantage of it & Volkswagen is one of those. They have listed 7 of their vehicles on LinkedIn so far & have got staggering 2772 recommendations till the time of writing this post!

This is a powerful area where it can get a lot of benefit due to such a large number of recommendations. You never know when some executive on LinkedIn sees a recommendation by a person who happens to be his LinkedIn connection & he makes the decision to buy that car! Or there can be bulk orders too. 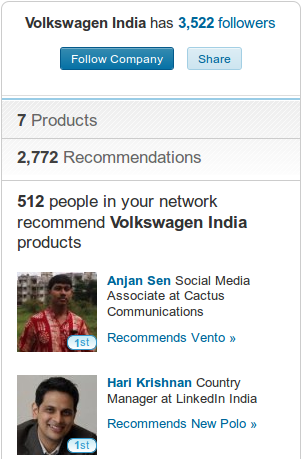 Volkswagen also started two campaigns at different times in India. ‘Innovations for Everyone’ was launched in 2010 while another campaign ‘Think Blue’ was launched recently in 2011. Both these campaigns were launched with much fanfare as an integrated marketing campaign across all the online & offline channels which created a lot of buzz for them.

People submit their ideas on the dedicated sites of these campaigns & they get voted for their innovation by other participants and the person with highest number of votes is declared the winner. Some of these ideas are passed on to the product team to study their feasibility of being introduced among the upcoming vehicles.

This shows the crowd-sourcing capability of Volkswagen India. I would rate these campaigns as highly successful and there is lot to learn from their success for marketers. Here’s the highest viewed video on their dedicated channel so far regarding the innovation for everyone campaign.

What do you think of Volkswagen’s social media practice? Share your ideas in the comment box below.

Gone were the days when social media was only used for interaction purpose. Now, with the evolution of digital marketing, social media has become another valuable platform that has the potential of growing your business. To understand Social Media Marketing completely, enroll in our Social Media Certification Course.

← Prev: 10 Ways to Crack Facebook Edge Rank Next: Be Optimistic About Social Media as an Educational Tool →