If an auto driver can use Digital Marketing then why can’t you? 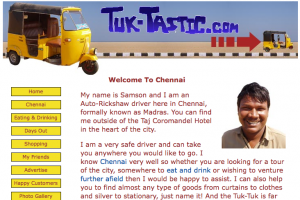 What we at Digital Vidya aspire people to do is exactly what an auto driver is doing to get customers. Samson, an auto-rickshaw driver from Chennai has set up his own website  www.tuktastic.comwhich not only gets him customer but has also made him the only auto-rickshaw driver within Asia to own a website. It is a very rare fact that in a country like India where only 75 million people use Internet, an auto driver has made a quality place for himself.

Thirty Eight year-old Samson failed in class V, dropped out of the school after class VII, and ran away to work as a cleaning boy in hotels before returning home. He also worked as a tailor and a leather jacket maker before he got into driving auto-rickshaw. But since 2006, Samson became the most sought after auto driver for the foreign customers with his website.  His service can be booked over an email, phone call or simply by an SMS, while locals can find him outside Taj Coromandel hotel, Chennai.

With www.tuktastic.com his reach has outgrown to a huge number of foreign customers who come to take a ride in ‘Tuk Tuk’. He claims that Tuk Tuk is safe to ride on and apart from being a cost effective mode of traveling its much more fun than any car or taxi.

Samson, on his website,  not only speaks about himself but has also provided all the relevant information about Chennai that a tourist would need including eating joints, shopping and places to travel. The idea of engagement is well used by Samson as he has also created a section of Happy customer where they can post pictures, share their experience and give a  feedback about their ride in tuk tuk.

There are many famous people who have traveled with Samson in his Tuk Tuk that includes South African cricketer McKenzie and Hashim Amla and once their entire team, Australian cricket team, Salman Rushdie and Padma Laksmi to name a few.

How it actually started? In 1997, after five years he became an auto driver, an English passenger prompted Samson to consider learning more about language and technology.

“I didn’t understand anything he said. First day he asked me to take him to Marina beach and bring back. When I dropped him back at his hotel, he asked me if it was possible for me to come back the next day morning. I only understood a word ‘tomorrow’. I said ok. He asked me to drop him off at an office and pick him in the evening. It became a routine after the second day,” added Samson.

When the Englishman was leaving Chennai, he introduced Samson to a new customer. The newcomer needed a guide and paid Samson good money in return. This rotation went on for three years during which he learnt to speak English.

During that time Samson took a woman from Japan on a ride, who later became a regular customer. He used to take her to a nearby internet café almost twice a day. “Regularly watching her going to the cyber café, I became curious to know about the Internet and e-mail and asked her more about it. Seeing my interest, she opened an e-mail address for me. I started requesting all my foreign passengers to send the pictures they take in Chennai to this id,” he said.

In 2006, a British pilot who has been a regular passenger on Samson’s auto helped him open his website. “He suggested many names from which I selected ‘tuktastic’, a combination of tuk-tuk and fantastic. It sounded quite nice. I printed a card with my e-mail ID and internet address to distribute to my foreign clients.”

After getting the hang of e-mail, Internet and its potential, Samson now hosts another website, NetwayAdvertise.com. Samson understands the dynamics and earns money by hosting online banner advertisements from local businessmen who can’t advertise in print or TV due to their high ad rates. He charges Rs 500 for a year for hosting a display ad on his website. At present, he is running 15 banner ads and he earns around Rs 7,500 a year from his online advertising business.

Isn’t it inspiring enough to start getting serious about leveraging Digital Marketing? We will continue to inspire you with more such stories. Please feel to share about any similar case studies you are aware of.