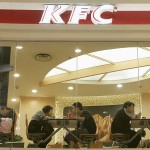 KFC is the No. 1 restaurant brand on Social Media. Their Digital Mantras for Success is

Radio KFC is an exclusive radio channel which plays music only in KFC stores across India. It plays the world’s most popular music like Rock, Pop, HIP – HOP, House

Objective of the Campaign: Design Your Own Bucket Campaign:

To launch a new tagline ‘So Good’ KFC India came up with an innovative theme wherein they created a Design Your Own Bucket App on Facebook. Fans got a chance to design their own unique KFC bucket. For this they could select varied colours and designs from the painting tools. They could even upload an image to beautify the bucket. At the end they had to add their ‘So Good’ moment. Three winners were selected at the end of each week. Winners got smartphones and other exciting prices.

The Secret of a great relationship is listening. KFC listens to its customers and ensure that every feedback is addressed.

With cutting edge technology and whacky indigenous ideas KFC created unique experiences for its customers with campaigns like CurryCature – a fun and quirky way to bring out the Indian in the western youth of today and An Augmented reality Wow app, a quick scan on an Indian currency note and fans behold the wow menu options. The app received over 35k downloads and became No. 1 on the iTunes app store in the food and drinks category. To promote this new dish KFC designed a new Facebook app wherein fans could create currycature of themselves. They can select a character from several options like Curry Singh, Curry Rathod, Curry Appa, Curry Dada etc. which they can easily associate with. Females fans also got to select from options given by KFC. Once the fan pick his/ her favourite character, app asked to upload a face image which will be superimposed on the character. To make the character more interesting fans were provided with accessory list which included moustache, turbans, sunglasses, bindis, nose-rings, earring etc. Once the styling is done fans could submit their entry by giving their name, email id and mobile number. Lucky currycatures would win exciting prizes like iPhone 4S, a Sony Cyber shot camera and vouchers worth Rs.2500/-

KFC faces tough competition from McDonalds. Its Happy Price Menu further lured lot of customers. To address this challenge KFC designed special menus for the Indian audience. To educate its customers of its affordable price menu KFC designed an out of box currency campaign.

KFC developed a Wow app. Fans can go to through this app and scan Indian currency notes. KFC Wow menu pops up based on the amount on the currency notes. Fans also played an entertaining quiz to win fabulous prizes. As a result of all these campaigns KFC was featured as a No. 1 devoted brand on Social Media. Overall positive sentiment on their Facebook page moved to 92.6%. Engagement rates are thrice the sector average. Unmetric report crowned KFC as the true social media king of QSR’s in India. With 5 million fans and counting KFC is amongst the top 5 Social Media brands in the country and boy it feels so good.