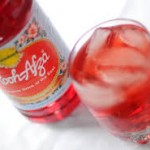 Hamdard means a companion in pain or a sympathizer in illness. Its foundation was laid in 1906 in undivided India’s capital Delhi. On independence its founders moved to Pakistan and in 1953 Hamdard was converted into a waqf (Islamic Irrevocable Trust). Some of famous Hamdard’s products include Rooh Afza, Safi, Swalin, Ispaqhol Husk and Joshina.

Rooh Afza is a summer drink to refresh mind, body and soul. Its replenishes the energy which is lost by excessive heat. Its main ingredients include citrus fruits, distilled sugar, vegetables and cooling herbs. It can be drunk mixed with plain water or can be used to make milk shakes or mixed with ice-creams and faloodas. Rooh Afza has been termed as the summer drink of the subcontinent. Onset of fierce summers in India and Pakistan comes along with this rose-pink drink and this sharbat has been an aggressive competitor of American colas.

Indian market for concentrated syrups is about 4 billion rupees and Rooh Afza controls 50% of it. In squashes and syrups market segment it controls a lions share of the market with 71% market share. Rooh Afza was ridiculed by Ranbir Kapoor in thee movie Yeh Jawaani Hai Dewaani twice and many experts are of the view that  Rooh Afza’s rose flavour no longer appeals to metro’s youth. Despite the onslaught by Cola companies, Rooh Afza has managed to remain in hearts and minds of entire nation. Rooh Afza commissioned cook-book author Nita Mehta to create 30 recipes inspired by the drink. Rooh Afza led kitty parties were organised in Delhi, Mumbai, Bangalore, UP and Punjab.

Rooh Afza has been in existence in India since its independence. Thus, almost everybody knows what the drink is all about. Rooh Afza did not feel the need to come online for promoting its sales till last year. Probably because of its excellent distribution networks and the long term advertisement planning of its marketing department that its entire audience has been aware of the product and Rooh Afza is constantly at the top of their mind with regular TV and Radio advertisements.

As more and more Indians mark their presence online and with young generation always glued to their smartphones and laptops, Rooh Afza decided to mark its presence on the new social medium for marketing its product. Social media advertisement is all about timing especially for products which are coming onto this stage for the first time. Rooh Afza’s Holi Contest was aptly timed. Holi, festival of colours marks the beginning of summers which is the main season of its sales. Rooh Afza was promoted as a naturally refreshing drink. Holi, as per traditional Indian culture is famous for its gujiya, bhaang and  thandai. Rooh Afza tried to create a place for itself in the drinks segment.

Rooh Afza, the rosy pink drink had started to lose its urban youth segment who were feed colas. Besides Yeh Jawaani Hai Deewani film where Ranbir Kapoor says that the drink is very bad had made a dent to its reputation. Rooh Afza wanted to capture the audience lost to colas and those lost under the influence of Ranbir Kapoor. What better medium could be to engage the urban and rural youth other than social media and we can see its results as well.

Facebook which has the largest audience was chosen as a medium to launch its online presence. People quickly responded to its photograph contest. In the first week itself, the company could see humongous engagement by people of all ages. I feel contests which give its audience an opportunity to express itself are the most valued. The photograph contest was one such outlet of people’s creativity. People thoroughly enjoyed their Holi with colours, gujiya and off course Rooh Afza. Winners were hugely awarded. It somewhere increased the space Rooh Afza occupied in their mind. Thus, social media for marketing purposes is for keeping products and services at the top of people’s mind in this information bombarded times we live in. Ultimately, majority of the sales happened through offline distribution channels but by promoting the product online on the eve of Holi, Rooh Afza has managed to carve a lion’s share for itself at the beginning of the season itself.