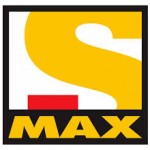 Sony Max was launched in 1999 and is a part of bouquet of channels distributed by TheOneAlliance, a joint venture between SET Pvt Limited India and Discovery Communications India. It has grown to become India’s No.1 movie channel and provides its viewers the biggest and the best Hindi movies accompanied by special events. It has made inroads into more than 45 million households till now. As with the introduction of extra innings, it changed the rules of the cricket presentation game; similarly, it conceptualized integrating live tweets during the telecast of the movie Jab Tak Hai Jaan and made history.

The topic for discussion on twitter was let open. The announcement about the plan of integrating LIVE tweets on air during the telecast of the movie was made on the channel’s official website and on the Facebook page. The intent was to enhance audience movie watching experience and create first-of-its-kind interactive movie experience. 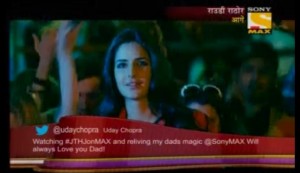 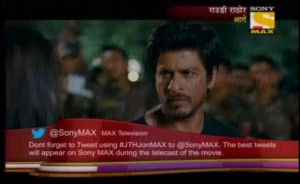 There’s a lot of scope of interactive display of movies or shows which traditionally have remained one side talking. People are ever ready to accept platforms that give voice to their thoughts and this was successfully tapped by Sony Max and in this process it made a special place in the heart of the audience. It has earned for itself new followers and excitement of people across the nation.

← Prev: Ferns N Petals Leveraged Social Media To Increase Its Organic Likes By 1508 In 14 Days Next: Interview With Dr. Vikram Venkateswaran, AVP And Head Of Marketing At Almetrik On Influencer Marketing →