Superdry is a UK company focussing on apparels for youth. It is a part of SuperGroup plc. It was founded by Julian Dunkerton and Ian Hibbs in the year 1985. SuperDry combines Japanese inspired graphics with vintage American styling in its products. This case study focuses on the India launch of the brand. How the brand leveraged the power of social media to get optimum results.

Superdry a UK based youth clothing company wanted to enter India. For this they launched a group of street drive events. The main objective of Superdry were: 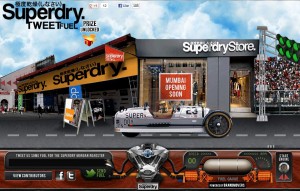