Kellogg’s was founded by Will Keith Kellogon on February 19, 1906 as Battle Creek Toasted Corn Flake Company. In 1922 it was renamed as the Kellogg Company. Since then Kellogg has grown into one of the world’s largest brand of cornflakes with manufacturing units in 18 countries and marketing presence in over 180 countries.
Kellogg’s requirement was to shift the marketing message of the brand into the lifestyle space of their target audiences and align themselves deeply with their values and experiences. They came up with an advertising campaigns aimed at creating a fitness platform which they could own and an integrated marketing initiative targeting different channels.

There were many key goals of this marketing campaign and the website that was the heart of this campaign. Following were the main objectives: The marketing campaign “Map My Fitness” was created as an integral part of the broader “Remember You” campaign which was designed to convey Special K’s commitment in helping women effectively manage their shape. The Kellogg’s team designed a digital platform which would perform as the center of personal sporting events for e.g. jogging, walking etc. This program provided their target audience with the products as well as the tools to get active and enhance their well being and over all health. Care was taken to embed the message associated with the brand in every aspect of the activities conducted during the period. 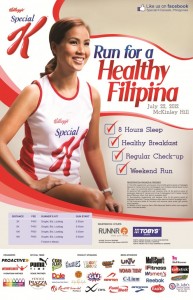 The agency team care fully collaborated with ninemsn, thus leading to the creation of a unique and one of its kind website creating awareness about women’s health and fitness. The partnership with ninemsn an advanced and seasoned online media owner benefited Kellogg  as it opened a window where they could make use of advanced web publishing toolkits and have them plugged efficiently into a cutting edge site.

The most significant part of the whole proposition was the innovative Special K navigator ,which performed the function of integrating a complex mapping system with Virtual Earth technology of Microsoft  and embedding it in the site. Participants/Users could avail this app which helped them in mapping jogging tracks around the city. Apart from ranking and swapping the favourites, one could also look at a street level plans of different routes. It also included additional/attractive features such as play-lists and general exercise/health information. Beside having the advanced content it also had a good mix of a competition mechanics with traditional editorial.

The agency as an integral part of the campaign, also worked out a cross-media advertising strategy for driving traffic to the site through an online activity focusing on female orientated content in ACP magazines and on the ninemsn network. Beside this, Kellogg’s also added their own media support to the campaign by integrating this on the on-pack promotional space for Special K products in the region.

They then moved ahead with the Evaluation approach-a marketing activity which combines and included the following strategies:

Each activity could be measured separately for tracking the number of consumers/audience, target audience and brand loyalists it touched. Hard analytics from the website’s reporting systems was combined along-with the brand effectiveness tracking for testing and measuring activities in key variables such as: Image of the brand, Message association, Purchase intent of the consumers, etc.

Following were the results of the whole campaign:

Following are the key learnings of the case study: