Why HDFC Is No.1 Among Indian Banks For Social Media Practice

HDFC has been one of the top Indian Banks to practice the Social Media strategy.

Indian banking industry is booming & is on expansion spree. Indian banks contributed 1.7 per cent to the total global brand value at US$ 14.74 billion and grew by 19 per cent in 2011 as per the annual international ranking conducted by UK-based Brand Finance Plc. 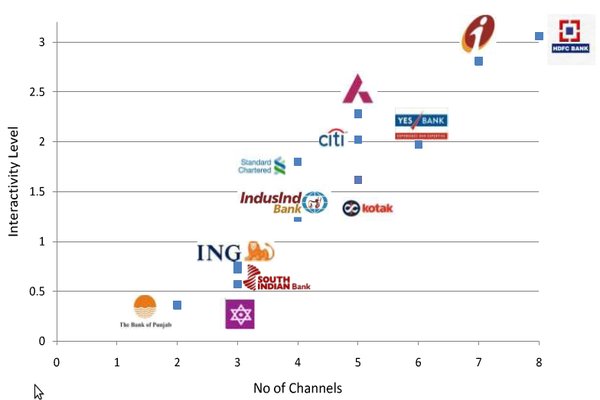 As per the graph above HDFC Bank has presence across different types of social media channels out of which the prominent presence is on Facebook, LinkedIn, Twitter, Youtube & their official blog. Important aspect is the engagement which they do on all these channels.

HDFC’s page on facebook generates admirable feedback from users which serves as a ground for them to understand their fans as well as promote their banking products. They have a money matters section where they provide interesting recent financial news of interest to their fans. Also they keep on engaging the users with interesting puzzles/jigsaws based upon financial terms. HDFC’s twitter approach is build upon again like their facebook approach on sharing interesting & relevant information with their followers, asking them interesting puzzles, sharing new products & deals from their stable and so on. No wonder that they have a healthy follower count of 1300+ which is growing on the daily basis. HDFC lacks on its Youtube marketing aspect and needs to learn from other banks like ICICI which is the second most active bank on social media in India.

Although HDFC has created some great commercials for their television audience which have found their way on Youtube also and these commercials have large viewership on Youtube too but they need to leverage Youtube by posting such videos regularly on their channel & promoting it further. Here is one such video with almost half a million views so far: 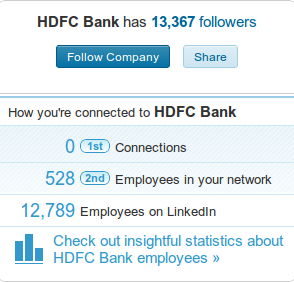 HDFC Bank’s company page on LinkedIn has more than 13,000 followers. They haven’t leveraged this platform to its full potential yet like they can display their products on their page on which they can get recommendation from the users which will serve as a live testimonial but still having a presence on LinkedIn is being helpful to them as the company stats & employees list can be browsed through to get interesting information about them.

Here’s a very good graph showing the comparison of different Indian banks on social media which clearly out states the leadership of HDFC bank in this domain: What do you think of HDFC’s approach on social media?

← Prev: Why Jet Airways Is No.1 Among Indian Airlines For Social Media Practice Next: 10 Ways to Crack Facebook Edge Rank →