Delhi Safari is an animated movie directed by Nikhil Advani with Krayon Pictures as its producers. It is first of its kind Indian animated movie developed by using stereoscopic 3D technology. It includes all the ingredients of a Bollywood masala flick coupled with the global message of wildlife protection and restraining deforestation. The movie is a story revolving around a team of animals namely Bajrangi, Bagga, Alex, Begum and Yuvi who undertake a journey to the capitol of the country, Delhi, to ask the prime minister of India, why the forest, which is their home is on the brink of destruction. Delhi Safari not only provides for fun, exiting entertainment but also raises the question on the unrestricted and illegal expansion by humans by destroying forests and the wildlife.

The movie hired the services of Socio Square a digital agency, for creating an exciting Social media/Facebook page so as to highlight the creativity of the movie and at the same time encouraging fans to interact with the official page in large numbers.

Since Delhi Safari was an animated movie, the official Facebook page of the film had to be interesting, something as unique and different as the film itself. 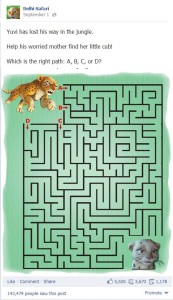 were the strategies that were adopted by Delhi Safari to attain it’s objective of maximum fan engagement via social media marketing activities on Facebook. This strategy of posting exciting content in the form of comic strips, puzzles and games received an overwhelming response from the viewers. Following are the key learnings that can be drawn from the case.

Be it products or films, businesses can always draw on the basic human need to try out games, find answers and solve puzzles. This social media marketing campaign of Delhi Safari displays how a smart content strategy which emphasizes on treating the community with something funny, entertaining and creative also gets them involved at the same time.