The Perfect Python Programming Tutorial for a Beginner Are you looking for the perfect Python programming tutorial? Yes, here you are. You have come to the right place. Before we go into the basics of Python programming language tutorial, let us have some light banter. Why should you learn Python? The answer is quite simple.

There is an ancient saying,

“When in Rome, do as the Romans do.” This logic applies to today’s age perfectly.

You are living in an era of computers, the internet.

Hence, you have to deal with data all around you. Knowing Python is a terrific advantage for you, any day. This Python programming tutorial for beginners should be an ideal initiation into the subject.

Python is a user-friendly, interactive, general-purpose, high-level, and object-oriented programming language created by Guido van Rossum in the 1990s. Similar to Perl, the Python source code is available under GNU General Public Licence. This Python programming tutorial point will take you through the basics and ensure a smooth initiation.

Why should you learn Python?

One of the best reasons to learn Python is that it is a readable language with frequent usage of English words. Many other computer programming languages use punctuation marks that can be confusing at times. Secondly, Python has fewer syntactical constructions when compared to other languages.

Students and working professionals who are new to the subject should go through the Python programming tutorial to get acquainted with the language.

What are the advantages of learning Python?

(i) Python is an interactive language – You can sit at a Python prompt and converse/interact with the interpreter directly.

(ii) Python is interpreted – Similar to PHP and PERL, and you need not compile your program before executing the same, as the interpreter can process Python at runtime.

(iii) Python is a beginner’s language – Python supports a wide range of applications, and hence, is the ideal language for beginners.

Python can run on multiple platforms such as Windows, macOS, and Linux. Most of the computers having macOS or Linux come with Python pre-installed in them. It is advisable to have the most current version installed in it.

The Easiest way to run Python

Using Thonny IDE is the ideal way to run Python. As Thonny IDE comes with the latest version of Python installed in it, there is no need for a separate installation.

These steps should help you run Python on your computer.

There are other ways of installing Python. Continuing with the python programming tutorial, we shall now look at how to install python separately. On finishing the installation process, you can start running it on your computer.

On installing Python, type the word Python in the command line to invoke the interpreter in immediate mode.

We shall start with a simple Python program. Usually, every python programming tutorial point will begin with this simple program.

Open the text editor and write print (“Hello world!”). When you run the file, the following output will flash on the screen Hello world!

You have now done away with the basic steps in this python programming tutorial. We shall now proceed with keywords and identifiers.

Keywords and Identifiers in Python

Going ahead with the python programming tutorial, you should know that keywords are reserved words in Python. There are 33 keywords on Python 3.7. Remember that the keywords are case sensitive. 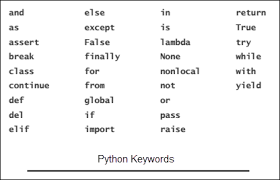 Note that other than True, False, and None, all other keywords are in lower case.

Identifiers in Python are names given to entities like variables, functions, and class. They help to differentiate between two entities.

This python programming tutorial lists out the rules for writing identifiers.

(i) Identifiers can be a combination of digits (0 to 9) or alphabets (a to z or A to Z) or even an underscore.

(ii) No identifier can start with a digit, but it can do with an alphabet.

(iii) You cannot use keywords as identifiers.

(v) There is no fixed length for an identifier. 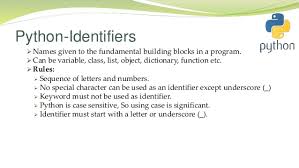 This part of the python programming tutorial for beginners deals with Python statements, indentations, and comments

You can also use semicolons to put multiple statements in a single line.

Unlike languages like C and C++ that use braces to define blocks of code, Python uses indentation. A code block begins with an indentation and ends with the first indented line.

Comments are crucial because it describes what goes inside a program. A person looking at the source code will find it comfortable to understand what it is about. Writing comments can also be helpful to you, as you might forget what you had written a long time ago. In Python, we use the symbol (#) to start writing a comment.

Use hash at the beginning of each line or use triple quotes.

The short form of documentation string is Docstring. The string that appears as the first statement in a function, module, method or class definition is a docstring. Use triple quotes for writing docstrings.

This portion of the python programming tutorial for beginners will discuss Python variables, liberals, constants, and their use cases.

A variable is a named location that can store data. You can change it during programming. One can use the assignment operator ‘=’ to assign a value to a variable.

You will get the output ten.

Change the value of the variable.

As the name suggests, the constant is a variable whose value cannot be changed.

We shall proceed with the python programming language tutorial and learn how to assign value to a constant.

On running the output, you get,

Allow the python programming tutorial to explain the above steps.

This python programming tutorial for beginners now moves ahead with the rules and naming convention for variables and constants.

(i) Use a combination of letters in both small or large, digits, or underscore to give names to constants and variables.

(ii) It is better to use names that make sense

(iii) In case you create a variable with multiple words, it is advisable to use underscore to separate them.

(iv) Capital letters are best to declare a constant

(v) Never use special characters and ensure not to start a variable with a digit.

Any raw data in a variable or a constant is literal. Python makes use of different types of literals.

These are unchangeable and can belong to three numerical integer types, Integer, Float, and Complex.

When you run the program, you will have an output like this.

A string literal denotes a sequence of characters that are surrounded by quotes. Single, double, or even triple quotes can be used for a string.

A Boolean literal can have either of these two values, True or False.

The output will be as follows.

In this program, we have used the literals, True or False. Usually, in Python, True represents 1, and False represents 0.

There is a special literal in Python, None. Use it to specify a field that is not created.

We shall look at four literal collections in our python programming tutorial. They are List literals, Tuple Literals, Dict Literals, and Set Literals.

The resultant output will resemble this.

Our python programming tutorial for beginners now moves on to Python Datatypes.

Every value in Python language has a datatype. Here are the different types of data types in Python.

Integers, complex numbers, and floating-point numbers constitute the Python numbers category. There is no limit on the length of the integers. A floating number can be accurate up to 15 decimals. Complex numbers take the form x + yj, where x is the real part, and y is the imaginary one.

It is a flexible datatype and constitutes an ordered sequence of items. Values separated by commas and enclosed within brackets represent a Python list. You can alter any element of a list.

Python Tuple is also a list, but that is immutable. Hence, you cannot alter any element of a Python Tuple.

A sequence of Unicode characters constitutes a string. Use either single or double quotes for representing a string. Triple quotes denote multiple strings. You cannot alter any element of a string.

An unordered collection of unique items is a Python set. Use commas to separate the individual values of a set. Just as in mathematics, you can perform functions like Union or intersection of two sets.

An unordered collection of essential value parts is a dictionary. Dictionaries are useful for retrieving any value from a considerable amount of data. Use braces to define a dictionary.

Different types of functions are necessary to convert data types. This python programming tutorial point will look at some ways of conversion.

(ii) Conversion to and from the string will require compatible values

(iii) It is also possible to convert one sequence to another.

(iv) Each element must be a pair to convert to a dictionary.

Python has two types of conversion

The output will be as follows.

This type of conversion uses pre-defined functions like float, int, or str. In Python, you also refer to it as typecasting.

This python programming language tutorial now shifts its attention towards Python Input, Output, and Import to perform the I/O task.

The str.format() helps us to make the output look attractive. It is a critical aspect of output formatting.

In the second example, we use braces as placeholders. The number denotes the order of printing the data.

The input function allows the flexibility to take data from the user.

As the program grows bigger, it is advisable to break it into small modules. Each module is a file that contains Python definitions and statements. These modules have a file name ending with an extension .py.

Use the import keyword to import a definition from one module to the other.

We have seen various aspects of Python in this python programming tutorial. Now, we shall look at Python operators

Operators are unique symbols in Python to carry out mathematical or logical operations.

(i) Arithmetical operations – Use the standard symbols for addition, subtraction, and so on. (ii) Comparison Operators – The signs like >, <, =, >=, <= constitute comparison operators. It returns True or False depending on the condition. (iii) Logical Operators – The logical operators used in Python are and, or, not.

This python programming tutorial has considered almost all the aspects necessary for a beginner. One should master these aspects to go deep into the subject and perform complex programming assignments. Python is a popular programming language used in Data Analytics today.

Every student who aspires to study Data Science should have in-depth knowledge of this subject. This python programming language tutorial is the ideal one for beginners. You should strengthen your base before moving on to the complex issues in Python.

With a Python Programming course, you can become a Python coding language master and a very qualified Python programmer.

← Prev: Beginners Guide To Use Python Lambda Functions Next: How to Use Answer the Public to Get More Traffic →