Leveraging social media for business, does it make sense? Some will say yes some will say no. To get an answer for this one, Digital Vidya on Facebook asked people to contribute Indian Social Media case studies to see what brands/organizations/individual have been able to mark a success in it. 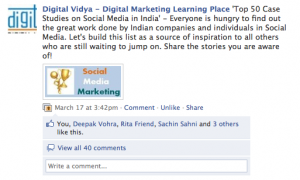 Along with some great case studies, the answer we got is – Yes, leveraging Social Media for Business makes an absolute sense.

Let’s know about the case studies:

This is just the beginning. Social Media is vigorously catching up in India. Digital Vidya will bring you face to face to the accomplishments of Social Media and we hope that the above compilation of case studies by Digital Vidya (Facebook) is useful for you. Do share with us if it inspires you in any way. Also, feel free to share any case study.

← Prev: If an auto driver can use Digital Marketing then why can't you? Next: Can Birthday Wishes Teach You The Importance Of Digital And Social Media? →