Apriori Algorithms And Their Importance In Data Mining When you talk of data mining, the discussion would not be complete without the mentioning of the term, ‘Apriori Algorithm.’

This algorithm, introduced by R Agrawal and R Srikant in 1994 has great significance in data mining. We shall see the importance of the apriori algorithm in data mining in this article.

An Introduction to Apriori Algorithms

This small story will help you understand the concept better. You must have noticed that the local vegetable seller always bundles onions and potatoes together. He even offers a discount to people who buy these bundles.

Why does he do so? He realizes that people who buy potatoes also buy onions. Therefore, by bunching them together, he makes it easy for the customers. At the same time, he also increases his sales performance. It also allows him to offer discounts.

Similarly, you go to a supermarket, and you will find bread, butter, and jam bundled together. It is evident that the idea is to make it comfortable for the customer to buy these three food items in the same place.

The Walmart beer diaper parable is another example of this phenomenon. People who buy diapers tend to buy beer as well. The logic is that raising kids is a stressful job. People take beer to relieve stress. Walmart saw a spurt in the sale of both diapers and beer.

These three examples listed above are perfect examples of Association Rules in Data Mining. It helps us understand the concept of apriori algorithms.

What is the Apriori Algorithm?

Apriori algorithm, a classic algorithm, is useful in mining frequent itemsets and relevant association rules. Usually, you operate this algorithm on a database containing a large number of transactions. One such example is the items customers buy at a supermarket.

It helps the customers buy their items with ease, and enhances the sales performance of the departmental store.

This algorithm has utility in the field of healthcare as it can help in detecting adverse drug reactions (ADR) by producing association rules to indicate the combination of medications and patient characteristics that could lead to ADRs.

It has got this odd name because it uses ‘prior’ knowledge of frequent itemset properties. The credit for introducing this algorithm goes to Rakesh Agrawal and Ramakrishnan Srikant in 1994. We shall now explore the apriori algorithm implementation in detail.

Three significant components comprise the apriori algorithm. They are as follows.

This example will make things easy to understand.

As mentioned earlier, you need a big database. Let us suppose you have 2000 customer transactions in a supermarket. You have to find the Support, Confidence, and Lift for two items, say bread and jam. It is because people frequently bundle these two items together.

Out of the 2000 transactions, 200 contain jam whereas 300 contain bread. These 300 transactions include a 100 that includes bread as well as jam. Using this data, we shall find out the support, confidence, and lift.

It implies that 50% of customers who bought jam bought bread as well.

According to our example, Lift is the increase in the ratio of the sale of bread when you sell jam. The mathematical formula of Lift is as follows.

It says that the likelihood of a customer buying both jam and bread together is 5 times more than the chance of purchasing jam alone. If the Lift value is less than 1, it entails that the customers are unlikely to buy both the items together. Greater the value, the better is the combination. 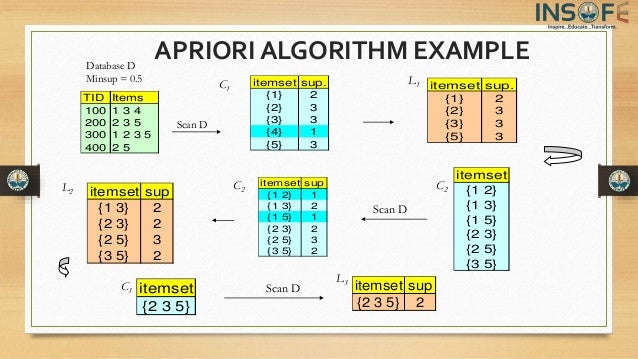 How does the Apriori Algorithm in Data Mining work?

We shall explain this algorithm with a simple example.

Consider a supermarket scenario where the itemset is I = {Onion, Burger, Potato, Milk, Beer}. The database consists of six transactions where 1 represents the presence of the item and 0 the absence. This table signifies the items frequently bought by the customers.

Make pairs of items such as OP, OB, OM, PB, PM, BM. This frequency table is what you arrive at. Apply the same threshold support of 50% and consider the items that exceed 50% (in this case 3 and above).

Look for a set of three items that the customers buy together. Thus we get this combination. Determine the frequency of these two itemsets. You get this frequency table.

If you apply the threshold assumption, you can deduce that the set of three items frequently purchased by the customers is OPB.

We have taken a simple example to explain the apriori algorithm in data mining. In reality, you have hundreds and thousands of such combinations.

How to Improve the Efficiency of the Apriori Algorithm?

Use the following methods to improve the efficiency of the apriori algorithm.

There are other methods as well such as partitioning, sampling, and dynamic itemset counting.

This video will help you understand the importance of the apriori algorithm in python.

The primary requirements for finding association rules are,

There are two ways of finding these rules.

We have seen earlier in this article how to prepare the frequency table and find itemsets having support greater than the threshold support.

Use binary partition of the frequent itemsets to create rules. You have to look for the ones having the highest confidence levels. You also refer to it as the candidate rules.

In our example, we found out that the OPB combination was the frequent itemset. Apply Step 2 and find out all the rules using OPB.

You find that there are six combinations. Therefore, if you have k elements, there will be 2k – 2 candidate association rules.

In this age of eCommerce retail shops and globalization, it becomes imperative for businesses to use machine learning and artificial intelligence to stay ahead of the competition. Hence, data analysis has a great scope in today’s environment. The use of apriori algorithms has great value in data analysis.

We have seen how you can deduce various kinds of data and enhance the sales performance of the supermarket. That was one example of the utility of the apriori algorithm.

This concept has been used in other critical industries like the healthcare industries, and so on. It enables the industry to bundle drugs that cause the least ADRs depending on the patient’s characteristics.

← Prev: What is Reddit? 5-Step Guide to the Front Page of Internet Next: Capsule Networks in Deep Learning: A Complete Analysis →